AKNALICH, Armenia — Under a cloudless sky this week, the radially segmented white domes of this town’s new Yazidi temple seem to capture the sun, which Yazidis regard as the sacred source of energy and truth.

Golden suns top each of the domes that tower over the lone cupola of an adjacent sanctuary whose completion seven years ago made it the first Yazidi temple in the post-Soviet world.

The lavish new edifice of polished granite and white Iranian marble opened its doors on September 30 to worshipers of the Yazidi religion, a historically vulnerable minority that suffered mass killings and abductions in its Middle Eastern ancestral heartland earlier this decade.

“Our happiness is without limit,” says Romik Avdoyan, a Yazidi from nearby Artashat who is visiting the temple for the first time with his wife.

“Now ordinary Yazidi people can come here and get blessings. It’s a very special moment for our people,” he says. “We’ve come through 74 genocides and now look at this.” 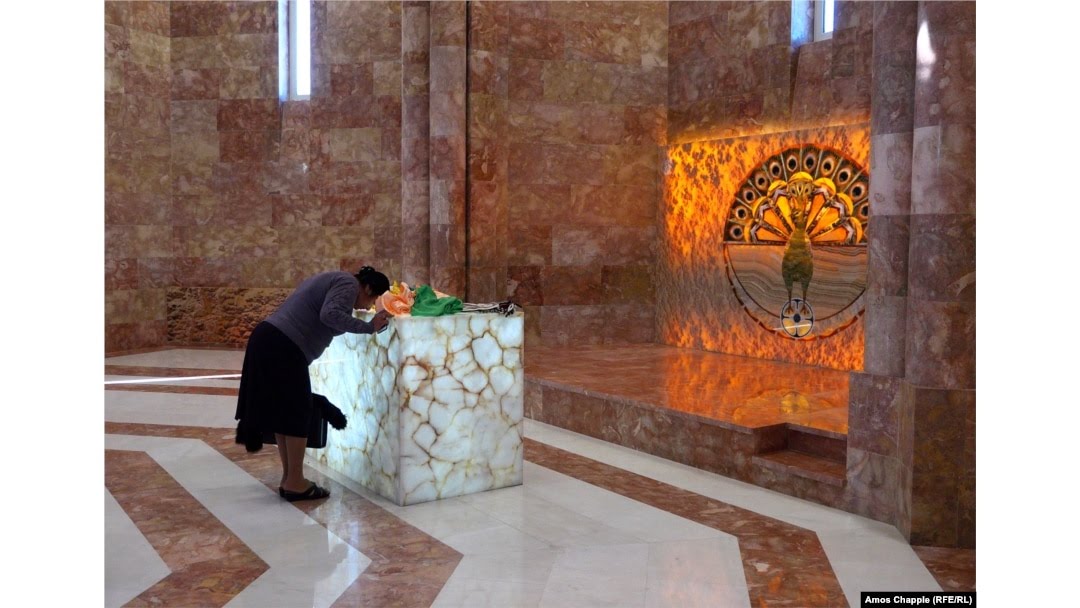 The budding facility is the latest sign of robust support for the endogamous Yazidi community in this southern Caucasus nation of around 3 million, where Yazidis are thought to number 30,000-50,000 and make up the largest minority.

To the south of Aknalich, in the distance but visible beyond the border with Turkey, stands one of Armenians’ most cherished landmarks, Mount Ararat.

Much nearer — in fact just kilometers to the northeast in this seismically active landscape — loom the three cooling towers of an aging Soviet-era nuclear plant at Metsamor. 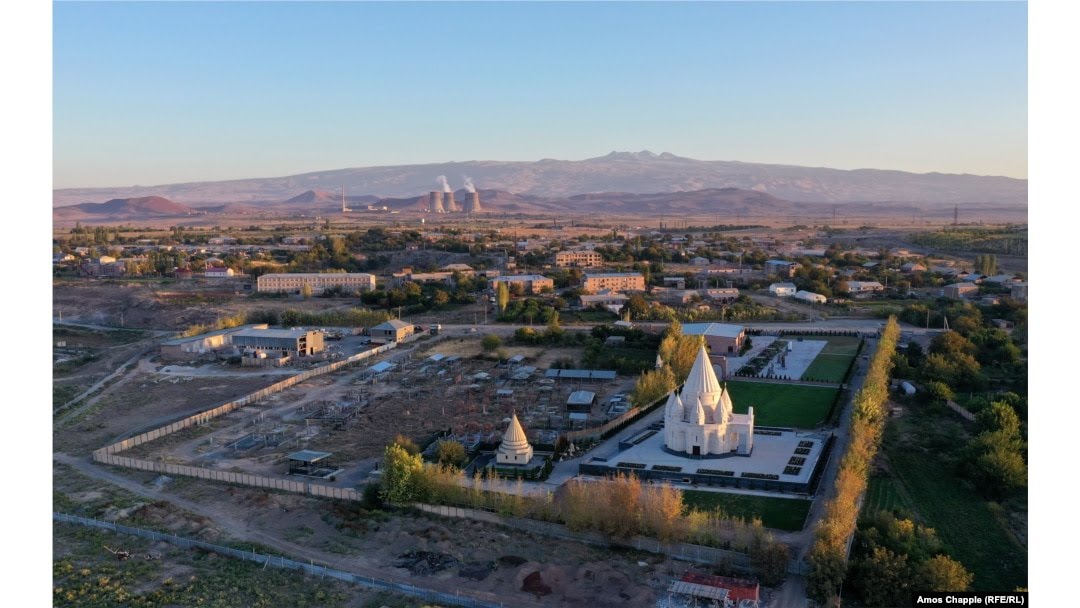 During an early morning visit this week, Quba Mere Diwane, hailed as the world’s largest Yazidi temple, seems finished except for some marble tiling around the building.

At least two of a handful of groups of visitors are Yazidis from Russia’s Black Sea region of Krasnodar.

At one point, a group of unknowing tourists is admonished for entering the temple through a side door without first removing their shoes.

A squat banquet hall nearby is already being used for Yazidi wedding celebrations.

A cemetery and its shrines — many of them black granite with portraits of the deceased — occupies a large section of the stony ground at the center of the complex.

Some of the roughly four-hectare site will house a seminary and museum.

Plans for the expanded complex at Aknalich reportedly began around the time that the more modest temple was completed.

That was two years before the systematic massacre and enslavement of thousands of Yazidis by Islamic State (IS) fighters in northern Iraq that thrust their ancient religion into the international spotlight in 2014.

The United Nations has since labeled the IS actions a genocide.

Tens of thousands of Yazidis who survived the IS assault in Iraq or Syria are still stuck in makeshift refugee camps in Iraq and Turkey, with many more resettling in Europe.

“Finally we feel that people around the world are recognizing us, that people will notice our culture for something positive,” Hasan, a Russian Yazidi visiting Aknalich from Krasnodar to see the temple, tells RFE/RL. “Let everyone know that there is a big church in Armenia and it is welcoming everyone.”

The domed temple at Aknalich was designed by one of Armenia’s most prolific architects of religious buildings, Artak Ghulyan, whose newly built Armenian Apostolic churches dot Armenia, with more in Russia and Jordan.

Mushegh Ghulyan, of Ghulyan Architects, tells RFE/RL that it was heavily inspired by Lalish, Yazidis’ holiest temple and a site of pilgrimage in northern Iraq.

“The main goal was to create a new, richer look for the biggest Yazidi temple in the world and remain native to traditions at the same time,” he says.

Its seven minor domes reportedly mirror Yazidism’s belief that God entrusted the world to the care of seven “mysteries” or angels. 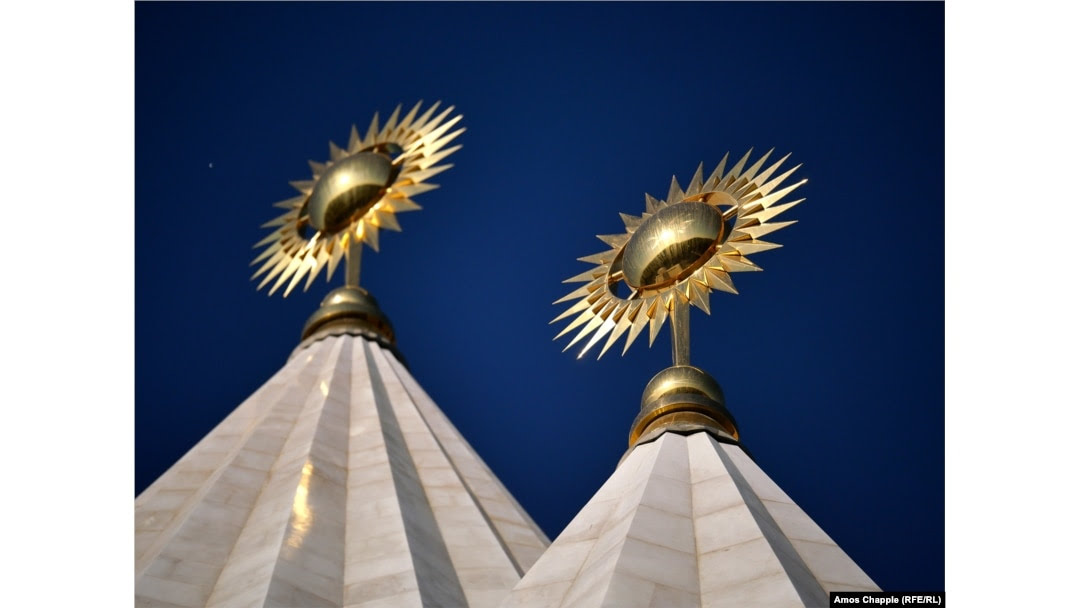 “The decorative elements and forms, both exterior and interior, symbolize sunbeams, as the sun is one of the most important symbols in Yazidism,” Ghulyan says.

In the temple’s ceiling are lights shaped like stylized suns.

A peacock, representing the most powerful of the Yazidi faith’s seven “mysteries,” is among the most prominent symbols on display.

Much of the marble inside is backlit and translucent enough to appear to be glowing subtly. 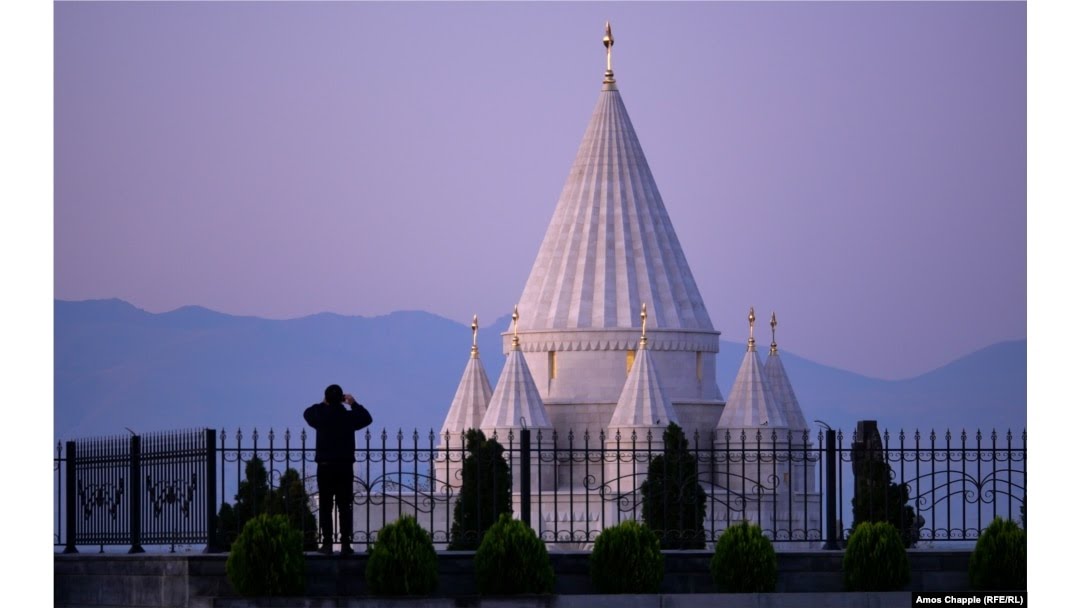 “The white marble stone is from Iran, which emphasizes the eastern, non-Armenian character of the building,” Ghulyan says.

Armenian-born Yazidi businessman Mirza Cholai Sloyan is said to have financed the temple complex. One source claimed Sloyan made his fortune in the TV industry after emigrating to Russia.

Reached on his Russian mobile phone after the temple’s unveiling this week, Sloyan declines to confirm his investment or discuss the project in any way.

Yazidi activists point proudly to Sloyan’s naming of a shopping mall in Moscow, Shingal, after the historical Yazidi region in northern Iraq, better known as Sinjar, that was a hub of IS militants’ 2014 violence against the group.

A statue on the temple grounds at Aknalich pays tribute to the victims of the Sinjar massacres five years ago. 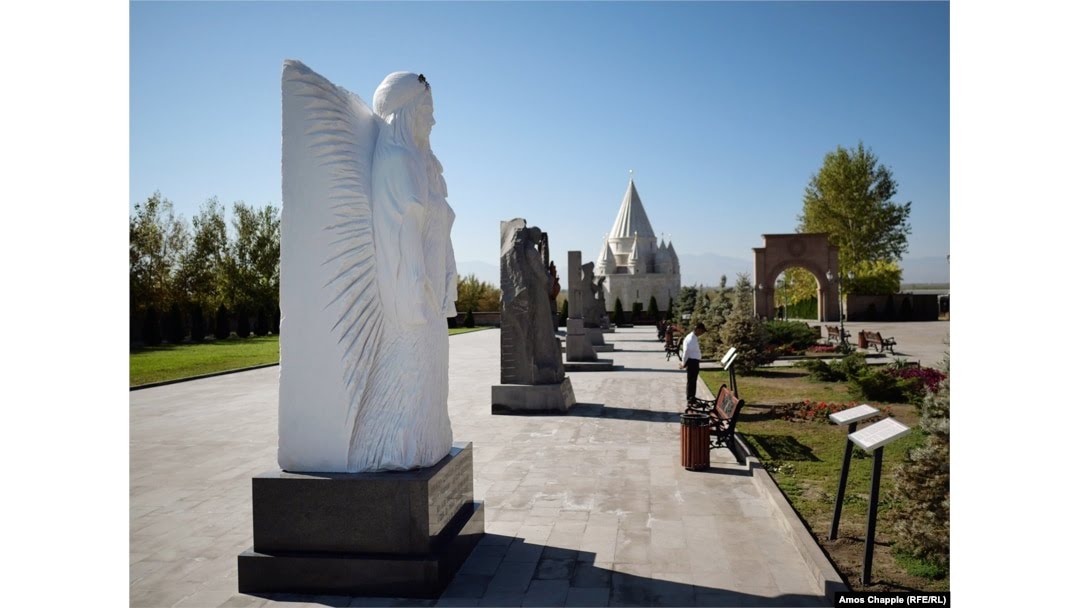 Memories of mass tragedy appear to have forged an uncommon regard between Yazidis and other Armenians, who are still arguing for international recognition that mass killings of more than 1 million at the twilight of the Ottoman Empire were a genocide.

Most of Armenia’s Yazidis are descended from refugees who fled persecution under the Ottoman Empire, which Yazidis accuse of perpetrating “72 genocides” against them.

It is a bond that did not go unnoticed around the unveiling this week.

“We suffered greatly during the oppression and attacks during the Ottoman Empire, as Armenians did,” Pari Ibrahim, executive director ex-officio of theÂ Free Yezidi Foundation,Â tells RFE/RL. “During the Ottoman genocide against Armenians, many Armenians in fact sought refuge among Yazidis in Iraq.”

Ibrahim adds: “As fellow religious minorities in the Middle East, we have shared some common struggles. For Yezidis fleeing to other places, Armenia has been an important and secure safe haven in the past and in the present.” 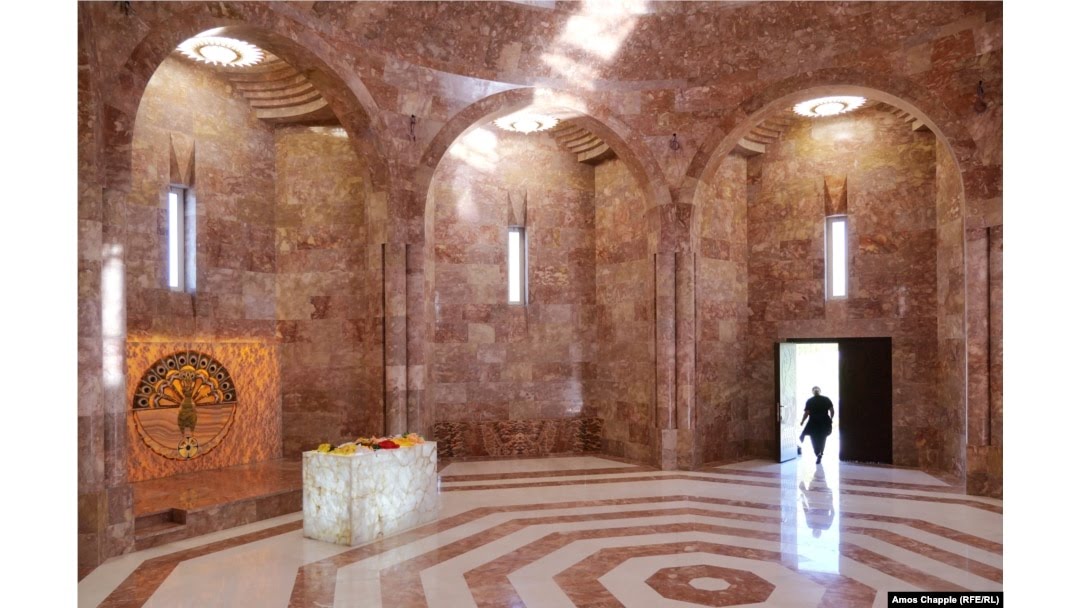 Estimates of the global Yazidi community vary widely but top out at around 1 million, with the past decade’s devastating violence in their historical homelands exacerbating their plight and complicating the figures.

One of the most prominent victims of the militant group IS’s brutality against Yazidis is Nadia Murad, who was tortured and enslaved along with thousands of other Yazidi women after her capture by IS fighters in Sinjar in 2014.

Since her escape after months in captivity, she has campaigned internationally for refugees and against human trafficking and violence against women and minorities. She was jointly awarded the Nobel Peace Prize in 2018 for her work to fight wartime crimes against women.

Abid Shamdeen, the Yazidi executive director of Murad’s organization,Â Nadia’s Initiative,Â says she welcomes the Aknalich temple and the signals it sends.

“Yazidisim is about spreading a message of peace and coexistence,” Shamdeen says. “We are grateful to Armenia for allowing us our right to continue practicing our faith.”

Yazidi migration and ISIS attack, are they contradictory or proportional to each other?

After nearly six years in captivity, a Yazidi family is on sale for 90,000 $