A fresh wave of shootings by Iraqi security forces has left at least three people dead in central Baghdad after protesters demanding widespread changes tried to storm a public square, stepping up their push to oust the countryâ€™s government.

The latest killings took the death toll in the month-long uprising to at least 320, while pressure mounted on the countryâ€™s political elite to resolve the most sustained unrest since the end of the US occupation of IraqÂ almost a decade ago.

Medics said they treated about 150 demonstrators on Friday, many of whom had been affected by teargas. Some had been shot with live rounds, others with rubber bullets, and yet more hit directly with gas canisters, which government forces have frequently used as projectiles. 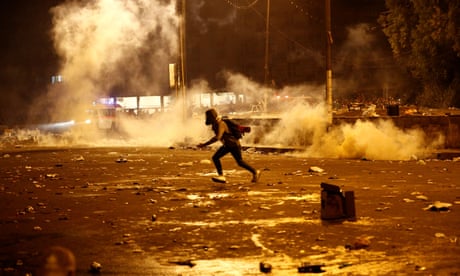 â€œWe were trying to push back the riot police and take Sinak bridge,â€ said Mahmoud, 24. â€œThe police rained teargas and smoke grenades and live rounds in the air.â€

Yassin, a 27-year-old doctorleading one triage centre, said: â€œWe received 50 injuries from direct hits from canisters and two dead, who were hit in the head.â€

The early days of the uprising were marked by large, mostly peaceful demonstrations. The countryâ€™s leaders responded by pledging to tackle rampant corruption and create jobs for a restless and disenfranchised young labour force. But as the unrest continued, the political class became far less amenable to these demands. Protesters increasingly accused officials of procrastinating in the hope that support for the protests would wane.

Instead, Iraqâ€™s middle classes have also taken to the streetsÂ in recent weeks, posing what senior leaders and their backers in Iran have deemed to be an untenable threat to the countryâ€™s prime minister, Adel Abdul Mahdi. The response since has been an uncompromising crackdown whenever protesters try to take new ground.

Saleem, a 23-year-old medical student, appeared shocked as he returned from the frontline in Tahrir Square in central Baghdad and struggled to describe what he saw. â€œThere was a teenager in front of me swimming in his own blood, a smoke grenade had hit him and he was seriously injured. I tried to do my best but he was hurt really badly.

â€œI just donâ€™t understand why the riot police are still firing directly at the protesters after all of these deaths in the past week. I donâ€™t know how they justify it to themselves.â€

Who is responsible for the shooting has been hotly contested, with many blaming government forces, but others alleging the involvement of Iranian-aligned Shia militias, whose leaders hold powerful positions in Iraqi public life.

Pulling out a copy of the Iraqi constitution from his back pocket, Hussien, a 26-year-old organiser of a makeshift tent camp, said the the militias were illegal. â€œWe are here to remind the government of the law,â€ he said. â€œIt is clear that militias are illegal, and political parties are urban militias who are looting this country.â€

Some of those on the streets said they drew support from a sermon on Friday from the countryâ€™s leading Shia cleric, Ayatollah Ali al-Sistani, who called for electoral changes that would allow voters to oust Iraqâ€™s leaders.

The explosive homes owners in Shingal are calling for help

The director of Nineveh Martyrs: The initial estimates indicate that the (600) victims of the cemetery may have been prisoners of Badush prison

arresting one of ISIS operatives who participated in Kojo’s massacre