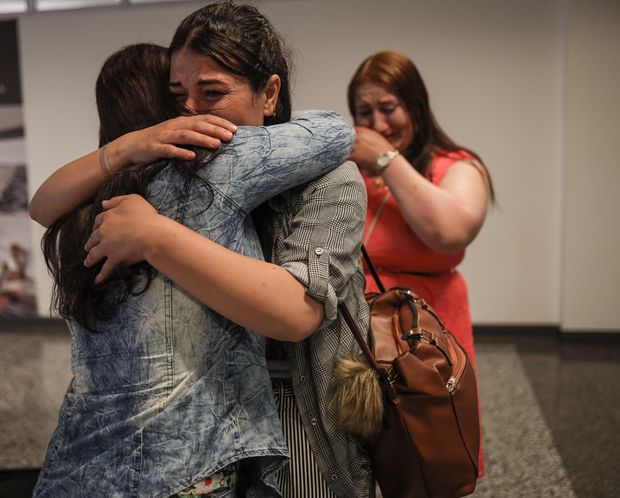 Nearly five years after Islamic State militants stormed into an Iraqi village and violently separated members of their family, two Ezidi sisters waited anxiously outside an arrivals gate at the Calgary International Airport.

Munifa Khudher, the younger of the two, carried a bouquet of flowers wrapped in pink paper.

Jihan, 30, and Munifa, 27, had not seen their youngest sister, Hudda, since Islamic State militants summoned the residents of their village, Kojo, into a town square in 2014. The sisters were pulled apart from their two brothers and mother, taken captive and sold separately into a brutal system of slavery. Briefly, in 2015, Jihan persuaded her captors to allow Hudda to stay with her, but that quickly ended. It was the last time either sister saw her.

Over the next years, they had little knowledge of what happened to one another or the rest of their family. Jihan and Munifa escaped their captors and found each other in a refugee camp in Iraq in late 2016. They came to Canada in the summer of 2017 as part of the Victims of Daesh program, which was set up by the Canadian government to help resettle displaced Ezidis, a predominantly religious minority.

The two sisters were living in Calgary when they learned that Hudda – only 16 when they last saw her – was alive, freed and living in a refugee camp in Iraq. 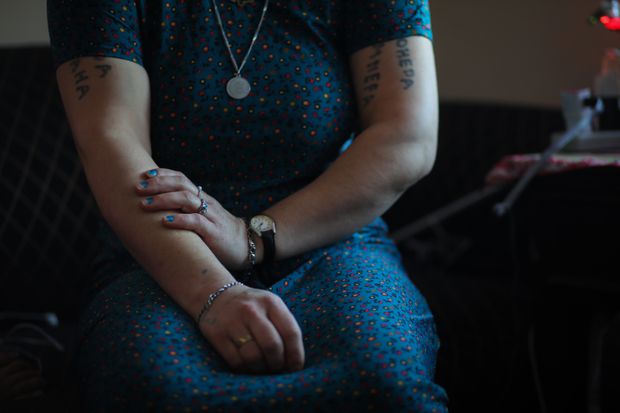 As The Globe and Mail reported in December, 2018, Jihan suffers from post-traumatic stress disorder with psychogenic non-epileptic seizures (PNES). When she feels overwhelmed by emotion related to the terrors of her past, her body responds by convulsing and whisking her into unconsciousness. These episodes can go on for hours.

In the general population, PNES occurs in about two to 33 per 100,000 people a year. But it is much more common among Ezidi refugees. In Calgary, six out of 300 Ezidis have been diagnosed with the disorder.

Hudda applied to join her sisters in Canada, but was denied in July, 2018, on the grounds that she did not meet the requirements for family reunification. This program allows immediate family members – spouses, parents or children – to follow relatives to Canada within one year of their arrival. But Hudda was not a spouse, a parent nor child of anyone in Canada – only an adult sibling. Her father died in a car accident while her mother was pregnant with her. Her mother and two brothers have been missing since the Islamic State arrived in Kojo, and are believed killed.

Jihan’s seizures worsened after her sister’s application was denied. Her physicians and local refugee settlement workers believed that reunification of the sisters would improve Jihan’s health.

“I do think family reunification is key to her mental health and for her integration into Canadian society. As with many Ezidis, life is incredibly hard for them as a community because there’s so few of them here,” said Jihan’s physician, Annalee Coakley, medical director for Calgary’s Mosaic Refugee Health Clinic. 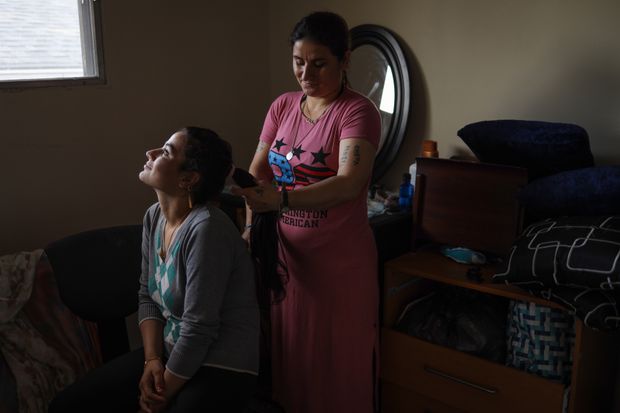 Family reunification has been a challenge for many Ezidi survivors of the Islamic State. Their family members remain in captivity, or their whereabouts unknown, for years, long past the one-year window for reunification. In February, 2019, the federal government implemented a temporary measure to help survivors of Daesh, allowing immediate family members to be reunited beyond one year. It also permits underage “de facto dependants” to join their extended family based on recommendation of the United Nations High Commissioner for Refugees. The measure will be in place until Dec. 31, 2020.

But Hudda still wasn’t eligible under those measures. Last spring, the sisters ping-ponged between hope and anguish after confusing indications from the Immigration, Refugees and Citizenship Canada (IRCC) and the UNHCR about Hudda’s future. In March, she was offered an interview to assess her eligibility to go to Germany as a refugee. The sisters worried that if she accepted a place in Germany, she would lose any chance of joining her sisters in Canada.

They shouted and sobbed to each other over video on WhatsApp. They had no clear answer over what to do.

Jihan’s seizures worsened. She visited the emergency department 20 times over a three-month stretch, Dr. Coakley said. These numbers do not include multiple responses from emergency medical services to help her during seizures.

In April, a spokesperson for the IRCC told The Globe that the youngest Khudher had no further applications open for coming to Canada. A few days later, the IRCC updated its statement and said Hudda’s application was being processed and prioritized. Later, the IRCC would not comment on how she had become eligible for family reunification.

In May, the Calgary Catholic Immigration Society (CCIS), a local non-profit that provides settlement services to immigrants and refugees, received word that Hudda’s application had been approved. Jihan confirmed this, saying, “Hudda is coming to Canada.” She added, “Thank you, thank you very much to Canada.” 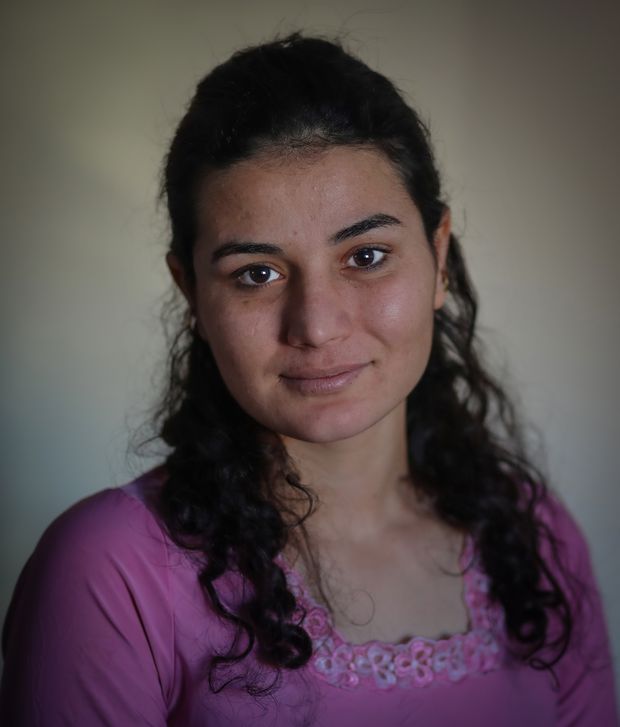 On July 31, Rowena Theodore of CCIS and Kheriya Khidir, a Ezidi Calgarian who translates for local refugees, read out flight information to the sisters as the blue screens on the wall of the Calgary airport updated arrival times. The late-morning flight from Toronto to Calgary was delayed 10 minutes, then 20. The sisters paced and stood and paced some more.

Ms. Khidir’s phone beeped with a text message from the UN representative who’d been with Hudda since she left the camp nearly 48 hours earlier.

Her sisters stood up and watched the arrivals doors. As soon as the glass doors began to open, one of the sisters gave a cry and Munifa rushed forward. Jihan hung back for a minute, taking it in, and then she walked forward and threw her arms around her sister.

After they let go, they held hands or linked arms as they waited for Hudda’s suitcase. Hudda put hand to her forehead and closed her eyes, overwhelmed. 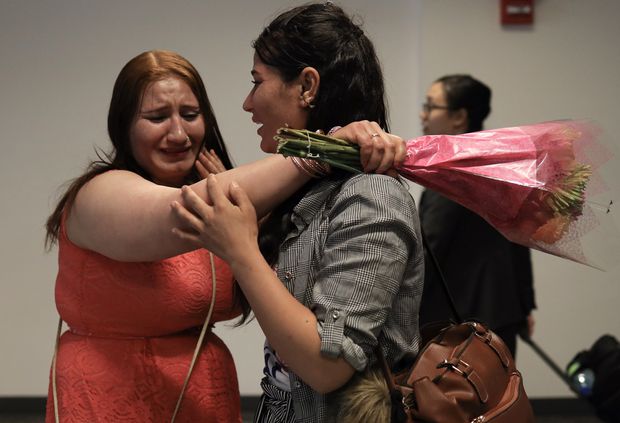 In the past year, about 10 Ezidi families in Calgary have been reunited with missing daughters and sons, or sisters and brothers, said Mr. Birjandian. The most recent reunion happened on Christmas Eve when four boys between the ages of 11 and 16, who’d been long-time captives of the Islamic State, arrived in Calgary.

When reunifications occur, “there’s a sense of relief, a sense of hope that things are going to get better,” Mr. Birjandian said.

“They get this sense of accomplishment that something good has happened and Daesh, or the people that have done these bad things to them, have been defeated.”

Approximately 22 survivors of the Islamic State have been settled through family-reunification measures, said Béatrice Fénelon, a spokesperson for the IRCC.

“For survivors of Daesh, including Ezidis, every effort is made to facilitate expeditious reunification with family members who are freed from captivity,” she said. 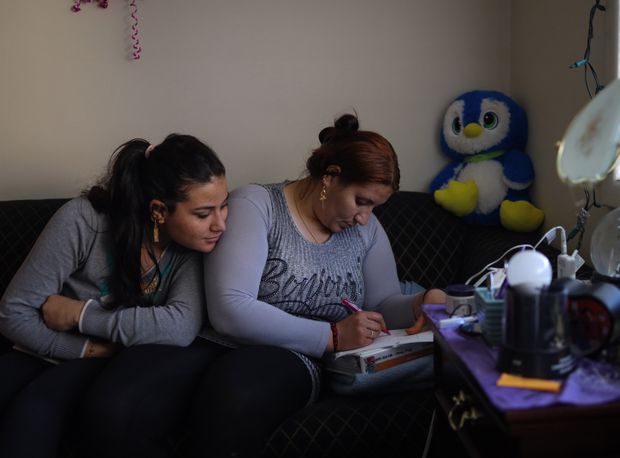 In the six months since her arrival, Hudda experienced Canadian cold for the first time, and the kind of snow that stays for months. The cold is the only complaint she makes about Canada. Jihan pointed out to her that the snow sticks around every year.

Hudda attends English school Monday to Friday. She can count to 10 and knows the alphabet – coaxing Jihan at the end when her sister gets hung up on the letter W.

Through their cousin who was translating over the phone, Hudda said she is “very happy.”

“I want to go to school and learn English and then I will see my future.”

The sisters make most meals together, buying food at the grocery store and carrying it home on the bus. The trio decorated for Christmas with bright balls bought at the dollar store. Holiday lights hang on the wall, along with the photos of their missing family members and a red satin tapestry that represents Lalish, the holiest temple of the Ezidi faith. 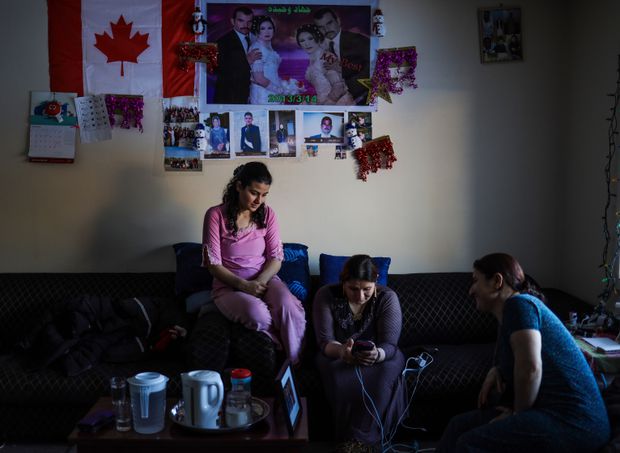 They say they feel safe in Canada, but continue to be very careful, securing every lock and keeping their blinds drawn during the day.

There have also been struggles since their reunion. After an initial lull, Jihan’s seizures became more frequent in August and September with near-daily episodes and multiple ER visits.

But since October, she’s improved and is now in one of the longest stretches without seizures since she arrived in Canada. She’s been to the emergency department only three times in at least 100 days.

“I feel like the emotional roller coaster has pretty much stabilized. It’s settled into the undulations of regular life,” Dr. Coakley said. 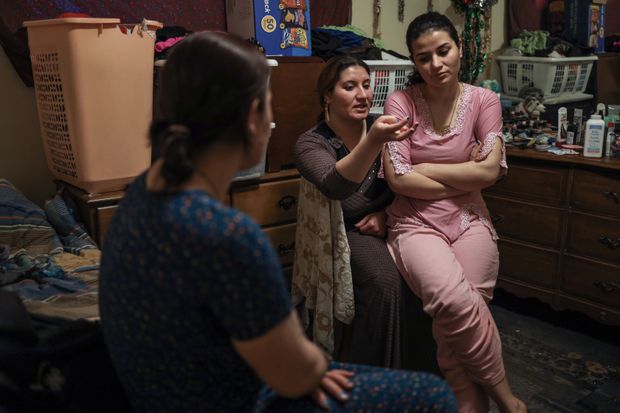 They still face challenges ahead. The sisters need a new place to live. Black mould is growing on walls of the house they rent, especially in the bedroom that the three girls share. They are seeking a housing transfer with assistance from CCIS.

Jihan needs to return to English school, having been asked to leave because of her disruptive seizures. The trio, along with other Ezidis in Canada, have been going through the difficult process of sharing their stories with Canadian and foreign intelligence services as United Nations investigators build legal cases against Islamic State militants.

Three days after Christmas, the Khudhers attended the wedding of a young Ezidi couple who they met in Calgary. After the ceremony, the sisters posted videos of the local Ezidi community performing a traditional dance, a line of dark-haired men and women shimmying their shoulders as they shuffle to the left.

It was a rare celebration for this community, which has quietly marked the Ezidi Eid these past three years with traditional fasting but no festivities. Many Ezidis did not want to laugh or dance, Mr. Birjandian said.

Now things are different. “Where they started and where they are today is just unbelievable,” he said. 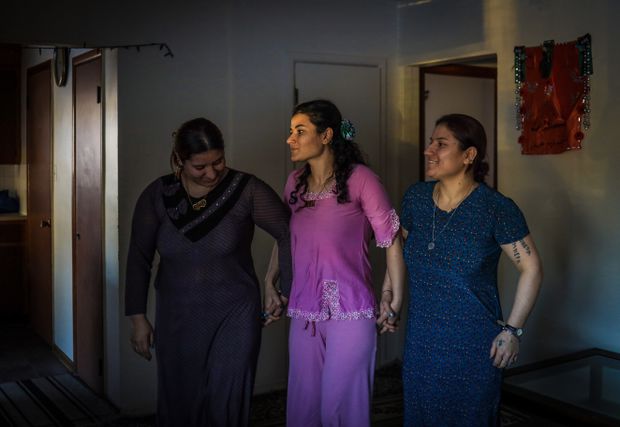 CHRISTINA FRANGOU
SPECIAL TO THE GLOBE AND MAIL
Show More

Health staff in Shingal district are continuing to protect the citizens and prevent Coronavirus, amid the poor services in there

The Zoroastrians and their religion are between perseverance and strict negligence

The Christian in their last holiness, wishing a peace to the world